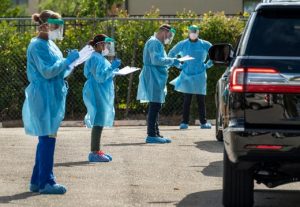 Gov. Kay Ivey on Thursday issued statewide shutdowns of all beaches, child care facilities, dine-in restaurants and bars in a bid to increase social distancing as the COVID-19 epidemic continues to grow in Alabama.

The order will close beaches at 5 p.m on Thursday as well as ban any public gatherings of 25 or more people. Ivey also directed all child care and daycare facilities to close, with exceptions made for facilities serving emergency personnel and health care providers.

“Despite our best efforts, the threat of the COVID-19 virus continues to spread and, unfortunately, we have not yet reached peak impact. The decision to place regulations upon Alabamians living in Jefferson County and its surrounding counties was an effort to contain the area in which the virus has been prevalent in our state,” Ivey said in an emailed statement. “My administration — and all the services of state government — are going to be as flexible as humanly possible to help make your government work for you during the coming days and weeks. I want to the thank the people of our great state for their continued patience and for taking great care of themselves and each other during this pandemic.”

“In addition, we rely heavily upon our first-responders and critical healthcare workers to help those who are ill, as well as essential state government employees to keep the continuity of government, and many of them struggle with dependent childcare if daycares close,” Ivey said. “As a result, I have asked the Alabama Department of Human Resources and the Alabama Department of Public Health to explore emergency rule making to make critical exemptions to allow for daycare to be provided for these areas of crucial personnel.”
The limitations mirror steps taking in Jefferson County and surrounding areas in the past few days, as the county marked the highest number of known COVID-19 cases in the state. But at a press conference shortly after Ivey’s order, State Health Officer Dr. Scott Harris said confirmed cases will continue to rise.

“We believe we have community transmission going on in the state,” Harris said, meaning COVID-19 infections have been picked up locally, not from out-of-state.

Gulf Shores announced that they’d close their beaches Friday morning, Mayor Robert Craft told WALA in Mobile. Craft said the closures would begin at 7 a.m. Friday, but Ivey’s mandate will close them earlier. “Our goal is primarily to protect our local citizens who are scared to death but also to protect the public that comes here,” Craft told WALA.

Gulf Shores is just one example of a municipality taking it upon themselves to close facilities and public use areas amid the pandemic. Jefferson County on Monday opted to close restaurants, bars and breweries for dine-in service for at least a week. They also closed senior care centers to visitors and cancelled private K-12 schools. The next day, the Alabama Department of Public Health extended those restrictions to five counties surrounding Jefferson County, where about half of the confirmed COVID-19 cases were reported. Both the city of Montgomery and the County Commission ordered all public facilities closed. The city also asked all employees to work from home if they’re able.

Ivey also said K-12 public schools would be closing for two and a half weeks. Since the state is under a state of emergency, school systems will not be required to makeup those days.

Alabama is not the only state making such directives. Louisiana Gov. John Bel Edwards on Monday limited gatherings to fewer than 50 people, like the CDC recommended Sunday night. Louisiana has had 132 confirmed cases of COVID-19 and two people have died.

Casinos, bar and movie theaters have been shuttered across Louisiana while restaurants are limited to delivery, take out and drive-thru orders only. Edwards said operations may be able to return to normal by on April 13.

Central and Tower Taproom closed their doors for the time being while Dreamland BBQ said they’d be selling out of product then doing the same.

Restaurants weren’t the only ones making changes ahead of the announcement. The Capri Theatre closed their doors through at least April 2 while the Alabama Shakespeare Festival has suspended all productions, events and activities. 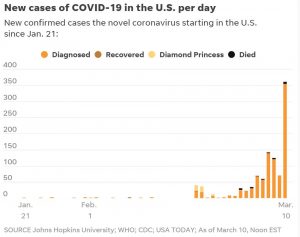