Deceptive Ballot on Amendment 1 (Vote No!)

The Statewide Amendment 1 on Tuesday’s Ballot has a lot of reasons for you to vote NO.  Among those reasons is that the ballot language itself is purposefully deceptive to the reasonable and prudent reader. The wording on the ballot characterizes the proposed Amendment as a name change to the Alabama State Board of Education (SBOE).  The wording buries the fact that the proposal is not a name change but the elimination of the elected SBOE and replaced by two commissions appointed by the governor. But you would not know that by the words our legislature carefully chose for your ballot. Additionally, the ballot language does not let you know of the extensive dictates these new commissions are to implement including national standards and comprehensive testing – the very tenants of Common Core State Standards that most Alabamians detest. 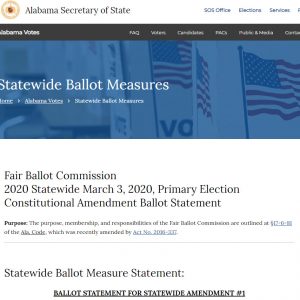 Because this ballot language is both deceptive and defective, this attempt to take away your vote, this ballot measure, is both illegal and unconstitutional. How?  Both the Alabama Constitution (Section 285) and the enacting legislation (Section 17-6-41) specify that ballot language must “clearly” state the “nature” of such a proposed amendment. So, our State Legislature has not only broken their own law, but also violated the Alabama Constitution in doing so.  There’s a lot of reasons to vote NO, but this deceptive, illegal and unconstitutional tactic to try to fool the Alabama voters has got to be at the top of that list.

Vote NO on Tuesday.